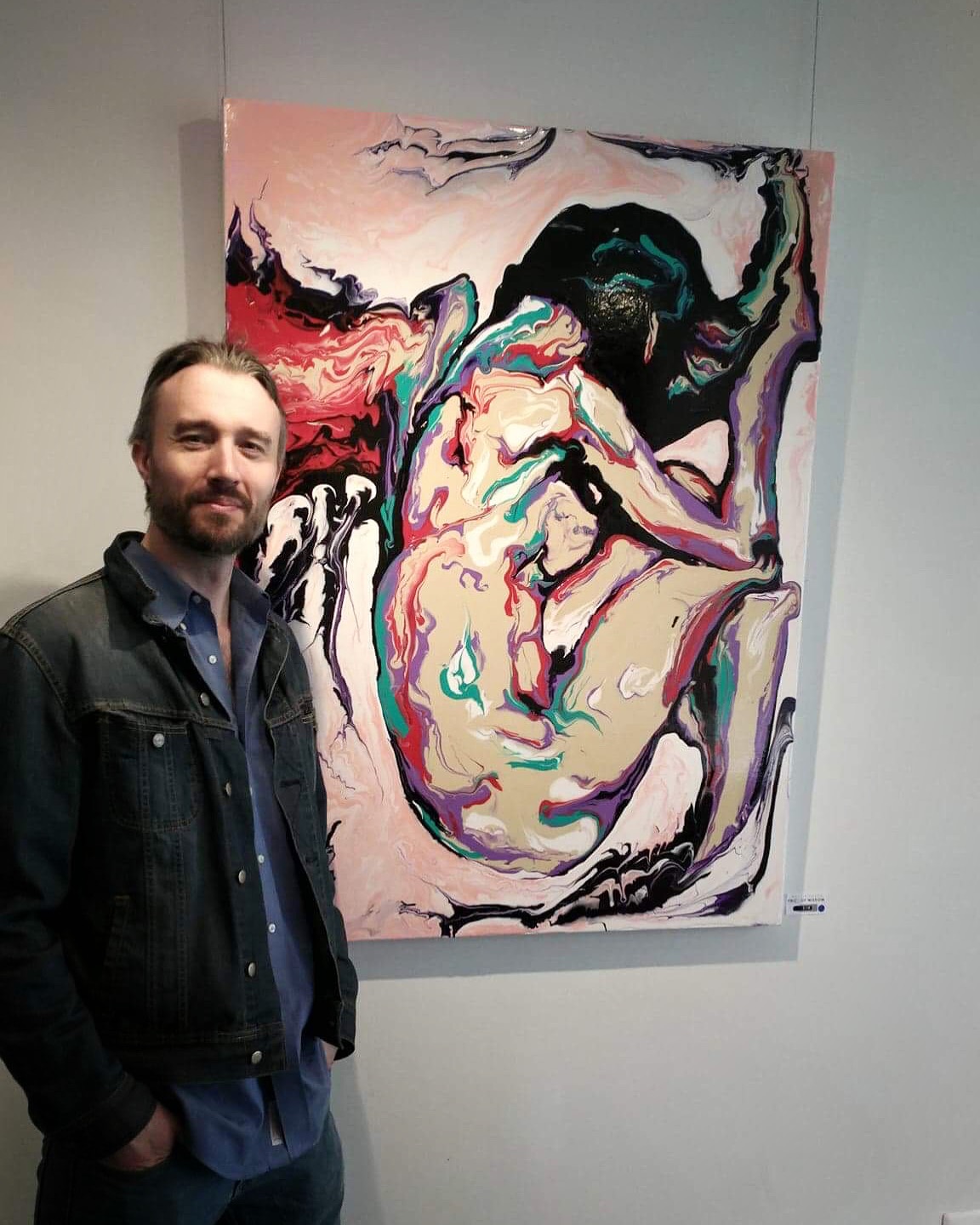 I was born in Moscow, Soviet Union in February of 1979. My parents made sure I was exposed to the arts at an early age, and they did not have to push very hard. I think the majority of the time I spent together with my dad – Igor A Kiselev – was in museums and galleries. He made sure to expose me to all forms of art and even though at first I hated abstraction of any sort, he insisted that I keep going and keep looking. He said that not all art is going to be for everyone, but it is important that I know what’s out here. I can still remember the quiet pride I felt when I finally ‘got’ an abstract painting. I must have stood in front of it for at least 10 minutes (an eternity to a 7 year old) and while not being able to put it into words, the seemingly random shapes and colors made sense to me for the first time. I felt as if the painting became mine in that moment.  While my father – an alumnus of the Moscow University of the Arts – made sure to expose me to the latest that the world of art had to offer, my godmother took me in the completely opposite direction. Galina Podoprigora conducted historical icon conservation work for the Central Restorations Studio in Moscow. While religion was very much frowned upon, the historical significance of Russian Orthodox icons was too great to be ignored even by the communist government. I would often sit there as she worked on the ancient depictions of saints and angels, walking me through the extremely stylized, almost ritualistic process involved in their creation and restoration. It was because of her that I got to visit some of the most ancient fortress-monasteries of Old Russia and experience the breathtaking frescoes that line the ceiling and walls of the cathedrals within. I feel that both of these artistic philosophies continue to inform my artistic expression.
When I expressed a desire to study art, my parents were only too happy to enroll me in a number of artistic circles for children and young adults, such as the Young Artist Circle of the State Historical Museum of Moscow, lead by Yuri P. Sorokin. And when we moved to the United States in 1993 after the collapse of the Soviet Union, art became my lifeline. Moving is hard for anyone, but the extreme culture shock that comes with transitioning from a totalitarian state to a democratic one is even more so. I took art classes in every grade, if only for the art supplies that they provided (just like most immigrant families, we were very much broke). Ironically, it was those same art supplies that I came across my current style. It was in a High School art class while working with the cheap, watered down acrylics. I got so angry at how poorly they layered and how the colors were so weak and muted because of it. So I gessoed an unevenly cut piece of plywood, laid it down on the table, and used the ketchup-bottle like containers of acrylic paint to splash the colors onto it, using a fourteen-penny nail to guide the paint once it was down. It was deeply satisfying to finally be able to express the intensity that I’ve always wanted to convey. I felt a direct, visceral connection to my painting. And even though I used up the entire paint budget for the semester in two months, my teacher did not stop me. I enrolled in the Tyler school of art at 17 on the strength of that painting. I was very excited to attend the school at first, but I quickly became disillusioned. I can’t blame the teachers or the curriculum, but I just didn’t feel like everything I was being taught had nothing to do with what I enrolled for in the first place. I barely made it through the first year before dropping out. For the next 15 years I abandoned painting. Living in tenements and rooms for rent I did not have the money or the space for it, or so I told myself. It wasn’t until 2011 that I picked up the brush again – for the sake of my sanity. My life was going nowhere and felt completely devoid of meaning and purpose and I needed to recapture that feeling of creating something outside of myself. Something I could share with others. That desire to reconnect to the energy and intensity of those few pieces I did during those two months in high school led me to create the style I now use.